One of the theories put forward on the existence of our universe, the Big Bang which is the Big Bang Theory, has been proved so many times in the light of new scientific developments.

The reason why we explain the theory in detail here is because the theory proves to everyone whether they believe in the Almighty Creator or not, that this universe was created out of nothing.

Now let’s get to know the theory a little better.

The history of theory dates back to the 1920’s when it was not proved yet and was only named Big Bang to be made fun of.

In the years which not enough observations were made due to the inadequacies of technology, Newton’s idea that the universe was infinite was widely accepted but was not able to answer many questions. In the light of each new development, scientists began to investigate and observe more.

Scientists started to focus on the Big Bang theory in 1929 when Hubble discovered that the stars were moving away from each other in the universe.

If a vehicle honking it’s horn passes by us quickly, and goes further away, we would hear the sound the most when the vehicle is closest to us. This is due to the fact that the sound waves emitted from the horn are suppressed meaning shortened as the vehicle gets closer to us. While the vehicle moves far away the wavelength becomes bigger. This is called the Doppler effect. When we look at objects in the light spectrum the same way as sound waves, we see that the colors of the approaching objects turn blue and the objects moving away turn red.

When Hubble examined the motion of the stars, he discovered that the light was constantly shifting to red, so what does that mean? Was the whole universe moving away towards different directions like a balloon being blown? 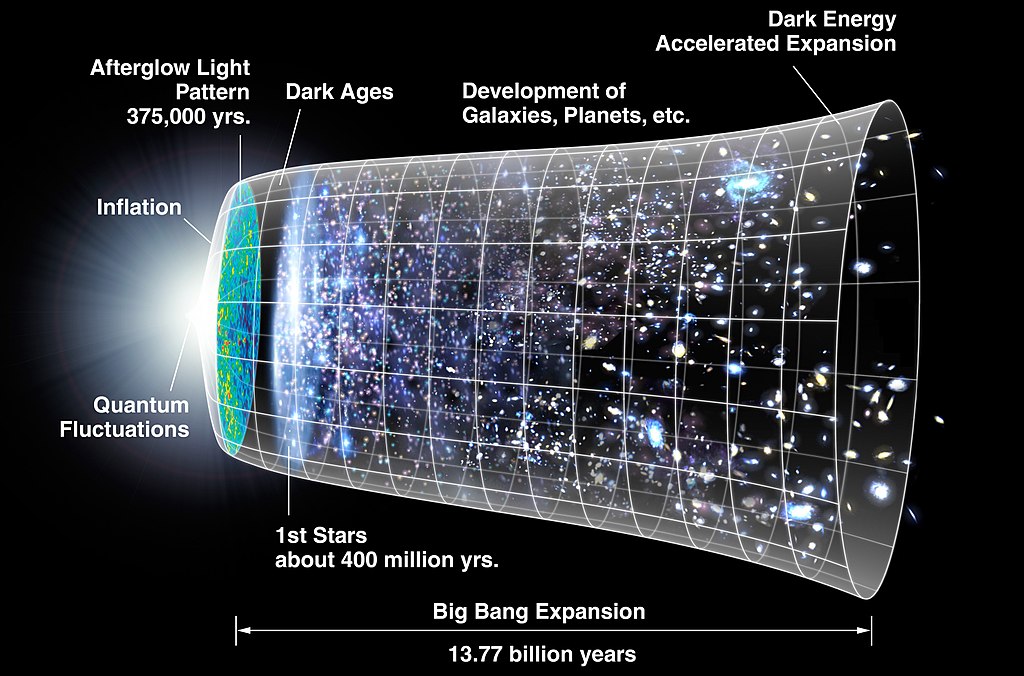 The theory, which had been a big question in minds for many years, waited to be proved in the light of new developments. 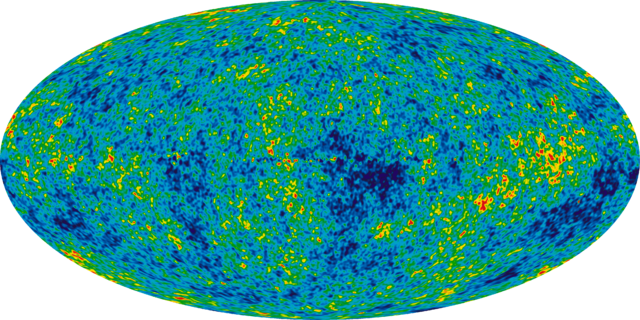 When you look at an object five billion light years away from the universe, you actually see its form from five billion years ago. Scientists began to study the history of the universe with this idea in mind. An explosion that had formed such a large universe must have been enormous and there should be signs of it.

In 1960, two engineers named Penzias and Wilson discovered a radiation coming from all directions as they attempted to detect radio waves coming from outside the Milky Way galaxy.

This radiation, of course, was the result of the radiation caused by the explosion of matter in the expanding universe. The light that began to expand from a single point with a very high temperature cannot give off light because of the density. After 300 thousand years, when the universe expanded enough, the light began to spread. We have mapped this radiation in 1992 and 2003.

The picture you see on the right is the picture of the radiance that occurred when the universe was 300 thousand years old.

Elements in the Universe

Our universe began its life when particles smaller than atoms, formed atoms in billions of degrees of temperatures and these atoms joined together while colliding at very high temperatures and formed other atoms. Hydrogen, Helium and Lithium atoms multiplied for 300 thousand years and were a very dense dust cloud, then they started to come down with the effect of gravity and this process continued until the first start and galaxies formed.
The atoms we just mentioned in the beginning, combined and separated in super-hot environments like stars, forming the next atom in the periodic table and sent it to the universe as a result of the explosions.

If the atoms we mentioned in the beginning and their proportions are known, then the observations and the theoretical calculations should match.
As a matter of fact, according to the theoretical calculations, the ratio of hydrogen and helium is fully compatible with the ratio of hydrogen and helium which should have remained after the Big Bang. If the universe did not have a beginning, then the hydrogen in the universe would have been completely burned out and turned into helium.

Formation of the Universe

Of course, we do not know exactly how the Supreme Creator made our universe come into existence from nothing, but we do have some clues regarding later stages of creation.

The Singularity in the Beginning

Other theories based on the General Theory of Relativity, which we can explain the Big Bang through, necessitate the existence of a singularity at the beginning of the cosmic time. In other words, our universe began 13.8 billion years ago in a dimensionless and infinitely dense singularity.

It is the first part of creation and the first part we can name. It is a stage in which the temperature is above the decillion degree (103232 zeros next to 10) and the physical theories are not valid. At this stage, the universe reached the size of a grape from an infinitely dense and dimensionless structure within 1043 seconds.

After the first creation is the phase where the universe is rapidly growing as if a balloon is being inflated at a tremendous speed. The temperature had dropped slightly between 1027 and 1032. Atoms had not formed yet but only subatomic particles such as the electron, quark, gluon, photon and neutrino, as you can see in the figure, had been formed. This phase lasted for about 10-23 seconds, approximately one septillion of a second.

When the temperature fell below 10 billion degrees, electrons and photons began to interact and neutrinos began to leave the cloud. As the universe gradually cooled, an environment formed for the quarks to form protons and neutrons. The universe looked like a hot dust cloud because the temperature was still too high for atoms to form.

The things that happened so far only lasted a few seconds and it was not possible for atomic nuclei to form because the temperature was too high. In the next stage that will start and last for 3 minutes, the temperature went below 1 billion degrees. In this period, only the lightest elements in the periodic table, namely Hydrogen, Helium and Lithium nuclei were formed.

For 300 thousand years, the temperature began to decrease gradually, and the atoms began to gather in the nuclei of electrons moving very quickly due to temperature. At the end of 300 thousand years, since free electrons began to gather together, the light which could not find a place to spread before began to slowly infiltrate. The first lights we have just mentioned as cosmic radiance came into being at this time. According to the data of WMAP satellite, 380 thousand years after the big explosion 12% of the universe consisted of atoms, 15% of photons, 10% of neutrons and 63% of dark matter.

The Universe we Know

13,5 billion years have passed after this point until our day. Thanks to gravity, subatomic particles such as electrons, quark and gluon have formed atoms, atoms have formed elements and elements have formed the planets or stars, thus forming our universe.
Our world belongs to a system of a star we call the Sun, which holds eight planets like itself with the force of gravity. This star holds all these planets as well as five dwarf planets, it’s satellites, meteors etc.

The sun is in the galaxy of which we call the Milky Way Galaxy, which holds about 200-400 billion stars under its own gravitation. Each star has its own planets and satellites.

The Milky Way galaxy is found in a universe where 2 trillion other galaxies like itself are found. Each galaxy has an average of 200 billion stars. The Milky Way is about 100 thousand light years, and our universe is 94 billion light years in diameter.
The Big Bang, which has been proved through many different observations, concludes that the universe has been created by a Supreme Creator.